Sushi is one of the dishes that famously identifies Japan. It is truly amazing how simple ingredients, when carefully chosen and prepared, turn into something that exudes sophistication and quality both in form and taste. It’s no wonder that this Japanese dish has caught the eyes and palate of people around the world.

Gaining popularity, many were inspired by the dish that different variations and varieties of sushi have stemmed over the years. Now mainstream, sushi of varying kinds are available to people in many places in the world.  In the U.S., thousands of sushi restaurants are scattered across different states, from luxurious hotels, fine sushi bars to small modest sushi places.

With the large number of places serving sushi, it is easier than ever to get sushi. In the city of New York, Sushi Sushi is one of the many establishments providing sushi in the area. However, it is only one of the few that actually serves high-quality sushi. Despite the variations and varieties of sushi that have emerged, Sushi Sushi has committed itself to continuously and consistently make available as well as accessible to New Yorkers great sushi. For almost a decade since they have served their first sushi in 2013,  they have aimed to deliver quality, freshness and goodness time and time again right at all their customers’ doorsteps. To achieve this, they have maintained to carefully source and choose the freshest of fresh ingredients as well as continue to learn by heart the art put into preparing great sushi, whether traditional or modern varieties of sushi. 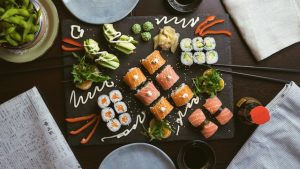 It is sad that some have commercialized the dish ruining the simplicity and sophistication that sushi is supposed to have.  Nonetheless, it is a wonderful thing to know that there are modern culinarians who show passion and put effort in learning about the art of sushi to make certain that excellence and quality are seen and tasted in the sushi creations they serve. Sushi Sushi being one.

With all the version and adaptations of sushi, it seems that the authenticity and uniqueness of the dish is fading. The good thing is that there are sushi chefs who continue to train long and hard to retain and preserve both the simplicity and sophistication of sushi.

Located in Tokyo, Japan in the District of Chūō, Ginza, the sushi restaurant, Sukiyabashi Jiro is owned and managed by Jiro Ono, a renowned sushi master. He has created a number of the finest sushi dishes in Japan and the world. Because of his mastery of sushi, his sushi restaurant was the first in the world to be awarded 3 Michelin stars and recognized as “World’s Top Sushi Restaurant”.